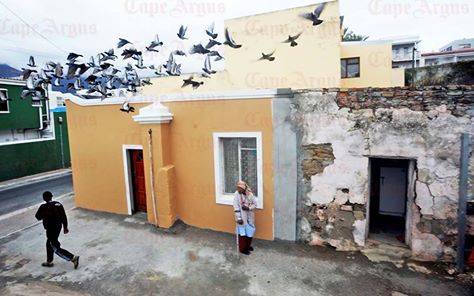 Samaritan told to down tools

A BUILDER who spent his own money repairing a derelict city-owned property in Bo-Kaap occupied by an elderly, frail woman, says the City of Cape Town has threatened to prosecute him because it is a heritage building.

Last month, the Cape Argus reported on the appalling conditions in the Chiappini Street house, which dates back to the 1800s. Latiefa Fagodien, 79, rents it from the city and has lived there for nearly five decades – alone after her husband died.

The property, which has never been maintained by the city, has rotting floorboards, crumbling door frames and ceilings caving in. There has never been electricity.

Farouk Ryklief from University Estate, a qualified builder, was so moved by Fagodien’s plight that, five minutes after reading the article, he jumped in his car and went to find her.

“I was standing outside my house. He and his wife pulled up and said they were looking for me and wanted to help,” Fagodien said.

The next morning, a team was on site and, two weeks later, the house had been painted, new ceilings were put in and the floor concreted and screeded.

“We stripped out the plaster and replastered with fibre mesh according to heritage rules,” Ryklief said, adding that they never took anything away from the property, only added on.

But he has now been instructed to stop work and threatened that law enforcement would be called and his tools confiscated.

“Ian Davids, from the City of Cape Town’s housing maintenance department, told me to stop because the house belongs to the council, not the tenant.”

Ryklief, who said he just wanted|Fagodien to be comfortable, said he still needed two more weeks and would be more than happy to work with a city engineer to complete the project. He planned to renovate the kitchen and bathroom area, which is open to the elements, but has been told to leave this section as it had heritage value.

Fagodien said she was upset when council officials arrived at her house, knocked on the door and walked in without asking.

“They started measuring things without even explaining what they were doing. I was really hurt.”

Benedicta van Minnen, the city’s mayco member for human settlements, said the builder was found on the premises and had been cautioned against doing repairs without input from the City of Cape Town and Heritage Western Cape. “Generally, repairs and maintenance to Bo-Kaap properties are regulated by the provincial authority, Heritage Western Cape, due to their historic value.”

She said in the meantime, a structural engineer had been appointed and an assessment was currently under way to establish the structural integrity of the building.

“Furthermore, the tenant was offered alternative accommodation as an interim measure, which she refused.”

Neighbour and friend Mogamat Salie said he had known Fagodien for 50 years and had never seen the city do any maintenance to the property. “Now when someone else wants to help at no charge, they threaten to remove his tools. It doesn’t make sense.”