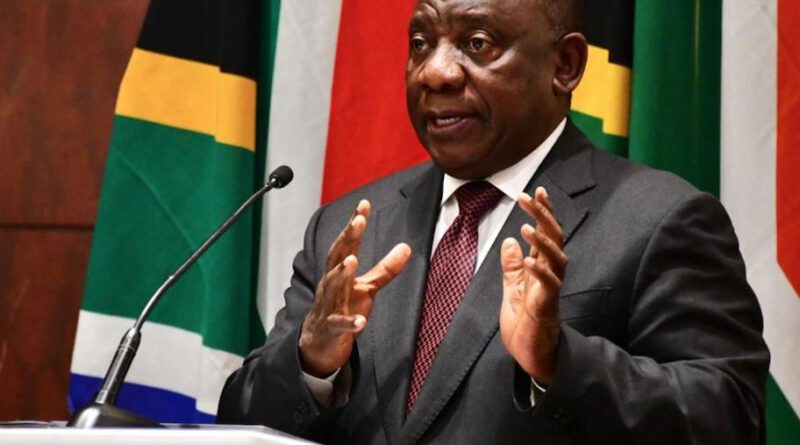 South Africa is under siege, with the number of women dying in the hands of men increasing since the easing of lockdown regulations under level 3, President Cyril Ramaphosa noted.

The President has since called for South Africans to end the culture of silence and report perpetrators to the South African Police Service (SAPS).

The country is still in shock after the gruesome murder of Tshegofatso Pule, whose stabbed body was found hanging on a tree in Durban Deep, Roodepoort — less than a month she was due to give birth.

Several other cases where women were either raped or brutally murdered have been hogging the headlines.

“It is a dark and shameful week for us as a nation. Criminals have descended to even greater depths of cruelty and callousness. It simply cannot continue.

“We note with disgust that at a time when the country is facing the gravest of threats from the pandemic, violent men are taking advantage of the eased restrictions on movement to attack women and children,” the President said.

In a statement, President Ramaphosa said he was struggling to come to terms with the violence inflicted on Pule, Naledi Phangindawo, Nompumelelo Tshaka and other women in the Eastern Cape and KwaZulu-Natal, whose bodies were found dumped in previous weeks.

The First Citizen has also bemoaned the level of barbarism and lack of humanity in the manner in which these defenceless women have killed.

“Tshegofatso Pule, who was eight months pregnant, was found stabbed to death and hanging from a tree in an open veld. It is also suspected one of the murdered Eastern Cape women was a victim of a mob killing.”

The Presidency mentioned another case of an elderly woman who was raped and a child found dead in a field, and two young women shot dead in KwaZulu-Natal.

“According to the SAPS, there has been an increase in violent crime, especially murders since we entered alert level 3. We need to understand what factors are fuelling this terrible trend and, as society as a whole, address them urgently,” the President said.

The President said he will be deploying Ministers and Deputy Ministers to meet with community leaders in all districts around the country as part of national efforts to combat COVID-19.

However, the leaders will also engage communities on this upsurge in GVB and look at ways to prevent the killing of women.

President Ramaphosa is also concerned that SA has one of the highest levels of intimate partner violence in the world and that about 51% of South African women have experienced violence at the hands of someone with whom they are in a relationship.

“In far too many cases of gender-based violence, the perpetrators are known to the victim, but they are also known to our communities. That is why we say this is a societal matter and not a matter of law enforcement alone.

“Gender-based violence thrives in a climate of silence. With our silence, by looking the other way because we believe it is a personal or family matter, we become complicit in this most insidious of crimes,” President Ramaphosa stressed.

President Ramaphosa calls on criminal justice to do better.

Citing the case of 36-year-old Sibongiseni Gabada from Khayelitsha, who was found murdered last month, the President said survivors of GBV believe the criminal justice is failing them.

Despite Gabada’s boyfriend allegedly confessing to the murder, the case against him was dropped, reportedly due to lack of evidence.

“For public faith in the criminal justice system to be maintained, gender-based violence needs to be treated with the urgency it deserves by our communities working together with our police.

“I urge the SAPS to act swiftly to track down whoever was involved in these murders and ensure there is justice for the murdered women and children. I also urge our communities to end the culture of silence and speak up. In doing so, you will be saving lives,” President Ramaphosa said.

The President has urged communities to work with the police and report any tip-offs they may have to the Crime Stop Hotline on 08600 10111 or send an anonymous SMS to Crime Line at 32211, or to call the Gender-Based Violence Command Centre at 0800 428 428. – SAnew.gov.za